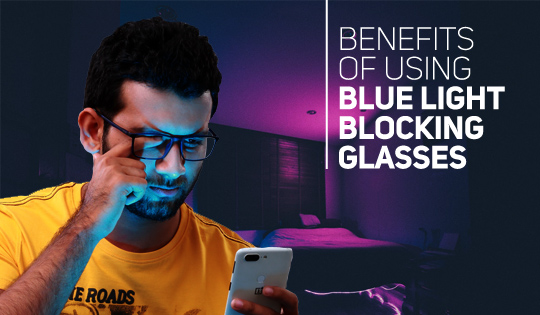 Americans stare at digital screens. A lot. And we live and work under an increasing number of CFL lightbulbs. And we spend time outside in sunlight. All of these things are sources of high-energy visible (HEV) light—or blue light—and all of them are reasons why blue light remains a hot topic in eye care.

NEED-TO-KNOW FACTS
What is blue light? Part of the visible light spectrum (between 400nm and 500nm), blue light has a very short wavelength so it produces a higher amount of energy. And blue light can be broken down into long-wave and short-wave. Exposure to long-wave blue light while outdoors brings about a number of positive physiological changes, including elevated mood and increased alertness. But according to most experts, exposure to short-wave blue light and UV rays, can be the most damaging.

Sleep Disruption: Myriad studies have shown the correlation between blue light exposure and circadian rhythm (sleep/wake cycle) disruption. This is due to HEV’s proven effect on suppressing the natural release of melatonin.

Eye Strain: There is no doubt that blue light contributes mightily to digital eye strain (DES). Blue light is the most “scattered” of the visible spectrum rays and the hardest wavelength in which to focus. Combining the blue light with the accommodative stress of staring at a screen for prolonged times is a recipe for DES.

Retinal Damage: Studies—most notably on mice and pigs—have revealed the occurrence of retinal damage due to long-term exposure to HEV rays. Though no study has linked a direct line between HEV exposure and retinal damage/macular degeneration in humans, many researchers believe the possibility is strong.

An American Optometric Association paper on “Light and Eye Damage” sources one of those animal studies when it states, “Shorter wavelengths of the visible spectrum (i.e., blue light, 400nm to 480nm)…show the greatest effects possibly due to photochemical or photooxidative damage in the retinal pigment epithelium.”

The paper goes on to state: “As the damaging processes are thought to be at least partially photochemical in nature, the damaging effects can be cumulative in nature, which may compound across one’s lifetime.”

And, “73.5% of Americans don’t know that eyewear can be used to protect the eyes from the short- and long-term effects of digital eye strain as well as blue light exposure.” – The Vision Council 2017 Blue Light/Digital Eye Strain Report

So come see us at Twelve Bridges Vision Care for the most complete solutions to blue light’s triple threat: visual eyestrain, macular damage, and sleeplessness. For kids and adults.